NTPC is India’s largest energy conglomerate with roots planted way back in 1975 to accelerate power development in India. Since then it has established itself as the dominant power major with presence in the entire value chain of the power generation business. From fossil fuels it has forayed into generating electricity via hydro, nuclear and renewable energy sources. NTPC became a Maharatna company in May 2010. The total installed capacity of the company is 44,798 MW (including JVs) with 17 coal based and 7 gas based stations. 7 Joint Venture stations are coal based and 8 renewable energy projects. The company has set a target to have an installed power generating capacity of 1,28,000 MW by the year 2032. The capacity will have a diversified fuel mix comprising 56% coal, 16% Gas, 11% Nuclear and 17% Renewable Energy Sources including hydro. By 2032, non fossil fuel based generation capacity shall make up nearly 28% of NTPC’s portfolio.
Power Grid Corporation of India Ltd.

Power Grid Corporation of India Ltd., notified by Government of India the Central Transmission Utility (CTU) as well as Navratna Company owns about 1,16,625 circuit kms. of transmission network across the country. It is the largest transmission utility of the world and operates ~90% of inter – State/inter-regional networks and ~50% of total power is being transferred across the country over its transmission networks. It maintains its transmission system with an availability of over 99%, at par with international utilities. POWERGRID is committed towards development of National Grid and a number of projects are under implementation/ planned.
Power Finance Corporation Ltd.

Power Finance Corporation of India Ltd., notified by the Government of India a Navratna Company, is dedicated to Power Sector financing and committed to the integrated development of the power and associated sectors. PFC is providing large range of financial products and services like project term loan, lease financing, direct discounting of bills, short term loans, consultancy services etc. for various power projects in generation, transmission and distribution sector as well as for renovation & modernisation of existing power projects. It has been designated as the Nodal Agency for development of Ultra Mega Power projects with a capacity of 4000 MW each under the initiative of Ministry of Power.
NHPC Ltd.

NHPC Limited, a Mini Ratna Category-I Enterprise of the Government of India, has become the largest organisation for hydropower development in India. NHPC Limited presently has an installed capacity of 5175 MW from 13 hydropower stations on ownership basis including projects taken up in Joint Venture. It is presently engaged in the construction of 11 projects aggregating to a total installed capacity of 4622 MW. Given the renewed thrust on development of hydro power in the country, it has drawn up a massive plan to add over 10,000 MW of hydropower capacity by the end of XII plan (year 2017).
Damodar Valley Corporation

The Damodar Valley Corporation is a joint venture participation undertaken by the Central Government and the State Governments of West Bengal and Bihar (now Jharkhand) to participate jointly for the purpose of building the Damodar Valley. The Corporation came into existence on the 7th July, 1948 as the first multipurpose river valley project of independent India. Total Installed Capacity of DVC is 6357.2 MW, Thermal Power Stations Capacity is 6210 MW and Hydel Power Station Capacity is 147 MW.
Life Insurance Corporation of India

Life Insurance Corporation of India(LIC) is the largest life insurance company in India and also the country’s largest investor.; it is fully owned by the Government of India. It also funds close to 24.6% of the Indian Government’s expenses. It was founded in 1956.
Others/ Public at Large
Note: The Share of the promoter companies (POWERGRID, NTPC, PFC & NHPC) is limited to 16% of the issued share capital of the company and the balance 84% is owned by Financial Institutions, Large Utilities and Public at large. 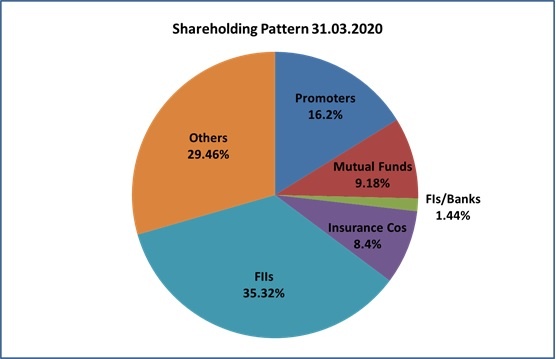